So hey, BlackMagic Design just came out with a new camera. Why? BECAUSE EVERYBODY’S DOIN’ IT, MAAAAAAN. What’s that? You haven’t come out with your own large sensor camera that shoots in intervals of K yet? Whoa now, don’t you want to be cool? C’mon, everybody’s doinnnnng it. If you do it, you’ll get laid at prom this year, I SWEAR.

And judging from all the press this thing has gotten, BlackMagic is getting mad amounts of head in the bathroom behind the Quizno’s at NAB.

If you’re out of the loop though, BlackMagic is the company that makes the color correction program DaVinci Resolve as well as those little video signal converter boxes. 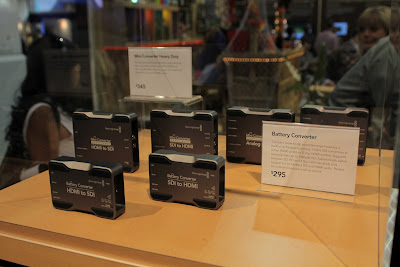 Their new converters come in regular duty and heavy duty flavors (for those of us who use these converters as the chest plate for our Iron Man arc reactors). 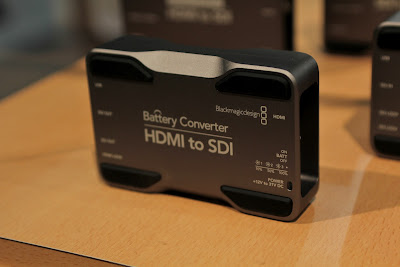 And on top of that, their new “Battery Converters” have built in rechargeable batteries, which is a win. Unfortunately though, not bearing the official Heavy-Duty label, they can’t “withstand being run over by the largest OB vehicle.” (WELL THEN WHAT’S THE POINT?!)

It would have been nice to see some sort of mounting option for these guys onto rails though. Oh well, I guess I’ll have to stick with my current method of chewed bubble gum and hope.

But I digress, ALAS, the Blackmagic Design Cinema Camera. 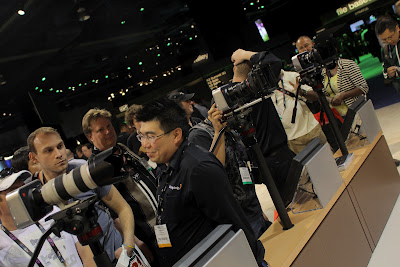 Look at Mr. BlackMagic’s pimp lean. What a pimp. 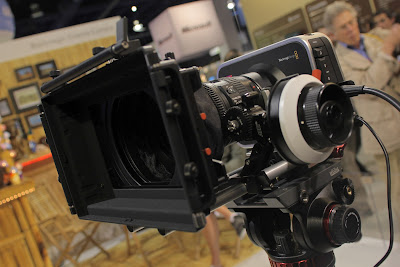 Here are the specs in a nutshell:
- Shoots 2.5K RAW to SSDs
- 13 stops of dynamic range
- Records as Cinema DNG, ProRes, or DNxHD
- EF Canon Mount
- HDSDI out
- Thunderbolt out
- 5″ Touchscreen LCD
- Bundled with a copy of DaVinci Resolve and Ultrascopes
- Choice of soup or salad

All for the delightful price of $2995! Which is actually more like $2000 if you consider the fact that DaVinci Resolve on its own costs $995. BUT, like I said, BlackMagic does own DaVinci Resolve and has been trying to push that “open source” CinemaDNG format for a while now. It’s COMPANY SYNERGY, as fake Martha Stewart explained to me in the made for tv movie Martha, Inc.

It’s a neat camera, all in all, and the test footage that I’ve seen so far isn’t bad~ http://vimeopro.com/johnbrawleytests/blackmagic-cinema-camera 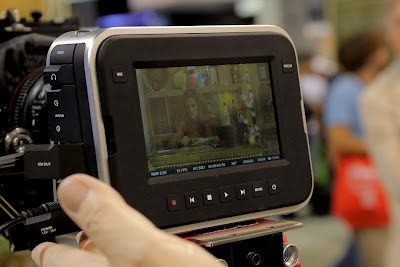 The entire rear panel is a touch screen LCD with 8 physical buttons. The top left one activates iris control to open up or close down the aperture using the FF and REV buttons. The top right is peaking (which is my opinion was pretty shitty and pales in comparison to the peaking on a SmallHD DP6, for example). Double tapping on the screen also zooms in though if you want to focus that way. 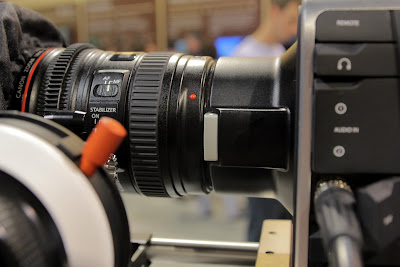 Here’s the Canon lens mount. At the moment, they say there are no plans for a PL version. The sensor size though is only slightly larger than the micro 4/3 sensors on the GH2 or AF100.

I do like the fact that the mount extends out in front of the body like this though, which make it easier get follow focuses on for lenses whose focus rings are super close to the mount~ 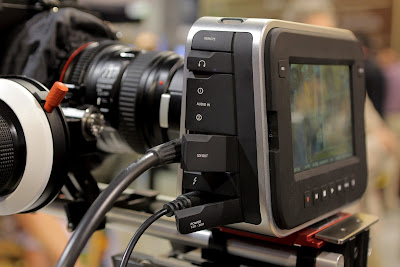 Here you can see the various outs of the body. The audio in ports are actually 1/4″ jacks, so… yeah, sound things. You’ve got HD-SDI out below that, which has the option of sending a completely clean signal for either a client monitor or recording to an external recorder. You can also record out via the Thunderbolt port below that, which will also be the only way you can view any sort of waveforms or vectorscopes while recording as the built in lcd CANNOT COMPUTE.

Then below that you get the power input. There’s an internal battery that lasts all of about 90 minutes, so you’ll have to bank on feeding power via p-tap to AB or V-mount bricks. Or just make your shoot days 90 minutes long. I prefer the latter option. 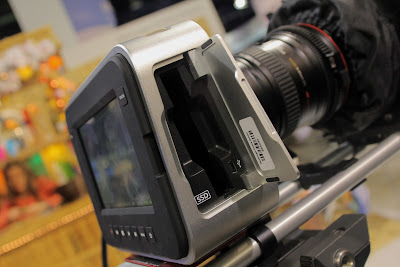 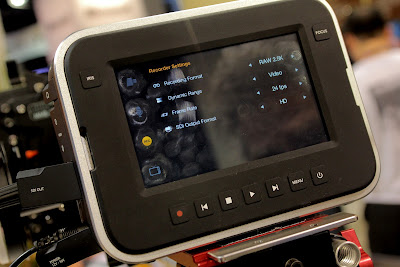 Here’s a look at the menu interface. *touch touch touch*

And that’s actually my most fundamental problem with this camera. It’s not that I’m writing it off altogether. I’m actually really interested in seeing what this camera can do. But there are just little things here and there that make me hesitant.
The fact that the touch screen is literally the only way to access particular controls on the camera irks me. I’ve had touchscreens fail me on set (*cough*Epic/Scarlet*cough*) because it was too cold or too humid or too RED. And if the screen gets damaged at all while you’re shooting, then all you can really do is start and stop.
Hopefully by release date they’ll have some option for physical button control of the camera (considering there is a slot for Remote on the side panel), but the BlackMagic rep said there were no specific plans for it at the moment. All I want is a camera that I can control via my PS3 controller, is that really too much to ask?
What also worries me is the fact that the camera uses off the shelf SSD drives, which aren’t exactly designed for production use. They’re designed to be taken out of an anti-static bag and straight into a computer, not tossed around a set. I’ll hand it RED, their SSDs are built like a tank, and I’ve done all sorts of shit to ‘em, JUST FOR FUNSIES.
I realize these are worst-case scenario concerns, but it’s the little things like these that end up setting all these new cameras apart in the end. Putting a sensor in a body is one thing, but putting a sensor in a body that can withstand getting set on fire, on the other hand…

Again, I know I’m chugging a lot of haterade here (THIS NOVELTY VEGAS CUP IS HUGE), but I’d be lying if I said I wouldn’t jump at the offer to shoot on one.
Third party accessories will inevitably start popping up to make the thing look less like a tiny HP photo printer, and who knows, come next NAB, Zacuto will probably have a whole new line of Zlackmagic Zineza Zamera Zezzoriez that start at $4999 (but have a lifetime warranty!).
In the meantime though, with all these new cameras coming out, IT’S A GOOD THING I FOUND THIS: 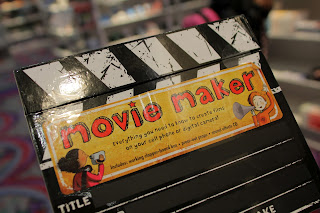 Take that BlackMagic! I bet I won’t be able to use the box for your camera as a slate, now will I??
Tags: 2012, blackmagic, camera, cinema, nab
Permanent Link