By Tim Wu on April 17, 2012 in Uncategorized
0
0
It’s NAB 2012 tiiiiiiiiiiiiiime. I actually didn’t have much time to browse the showroom floor because I got to Vegas later than expected today. On a completely unrelated note, there are delightful sales going on right now at the Tanger Outlets just outside of Las Vegas.
In the hour I did have before closing though, I did get to check out some of those items at Canon that EVERYONE AND THEIR MOTHERS RAGING OVER. (My mom was not as impressed D:) 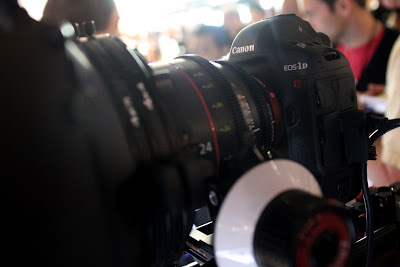 So here’s the 1DC, Canon’s latest and greatest in tiny sized movie making technology. In a nutshell, all the hub-bub is surrounding its ability to shoot 4K in a DSLR body. ZOMG. It’s that DSLR form factor that by now we’ve all (by force or not) have come to know and love, but with more flavors of recording. A lot more, actually~ 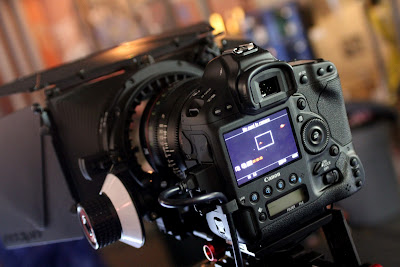 Along with 720p, 1080p and 4k, you can also shoot in a Super35 aspect ratio. This S35 option allows you to use cinema lenses that don’t quite cover full frame sensors (which ironically includes some of Canon’s new cinema zooms). I was gonna type out the full specs, but then I saw it was long… Soooo, I took a photo of it instead. 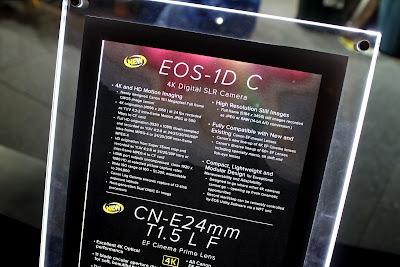 (Click on it to see it IN STUNNING 4K) As you can see, there’s a lack of frame rate options, which is a shame~ For that, you’ll have to turn to the C500. BUT, the C500 can only capture 4K 4:2:2 into an external recorder as opposed to the 1DC, which can do it straight to CF cards. I didn’t get the chance to see the C500 up close and check it out, but this is what the guy in the Canon polo tells me, SO HE MUST BE RIGHT. 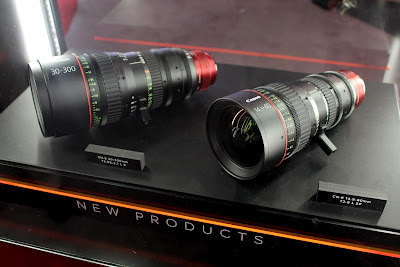 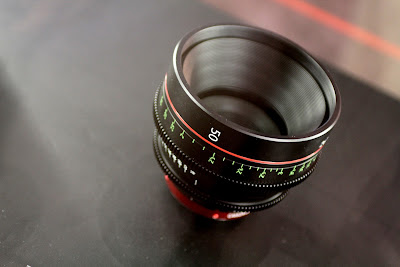 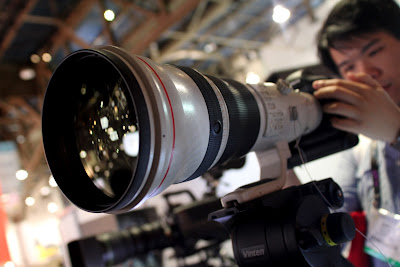 Here’s a 400mm (I think?… I’m the worst blogger ever) on a 1DX, the stills version of the latest in the 1D series. The photo rep guy told me was he was sad that everyone kept coming over thinking it was the 1DC, and would leave when they found it wasn’t. “This camera is cool too!,” he said. To which I responded with, “Ooh, Sachtler makes steadicams?!?” and walked over to try one on. 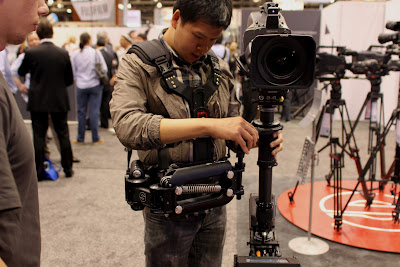 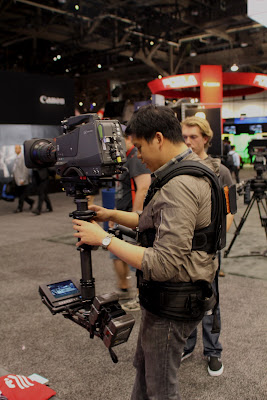 I actually didn’t even know they made Steadicams. They’re part of a line they call the Artemis, and they come in at pretty curious price points. Their mid-range level model, for example, which is supposed to compete with the Glidecam X-22 or Steadicam Zephyr comes in at under half the price point (~$4500). They didn’t have one on display, unfortunately, SO I CAN’T JUDGE IT WITH MY HANDS. 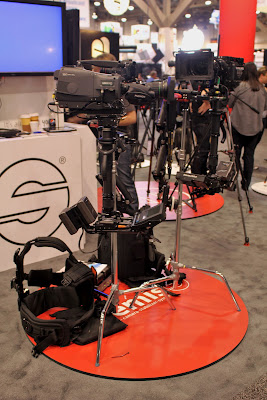 Before the hall closed, I got the chance to take a look at some of Arri’s new swag. With new camera bodies coming out more often than George Takei updates his facebook (ducks, whaaaaaaaaaaaat), I’ve found that more recently I’ve turned my financial attention towards BLING. Here are Arri’s latest grips, essentially their version of O-grips, with ball-joint handles that lock in an infinity number of positions. 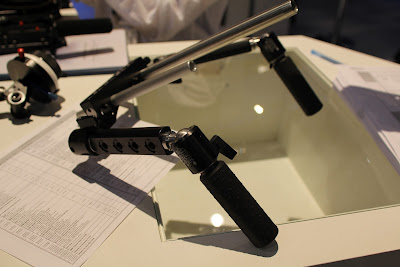 They adapt to lightweight 15 and studio 19mm rods, so you’d be able to use them with both DSLR rigs as well as larger Alexa or Red rigs, which is ideal sauce. 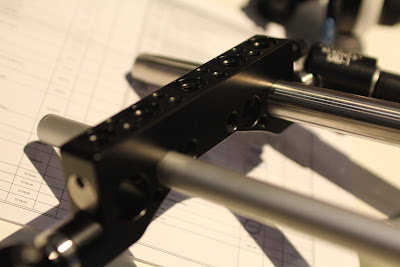 Plus the handles and rod bracket are tapped with 3/8 16 holes all over, which allows you to Noga arm off all sorts of things, like a monitor, an evf, or a piece of chicken. 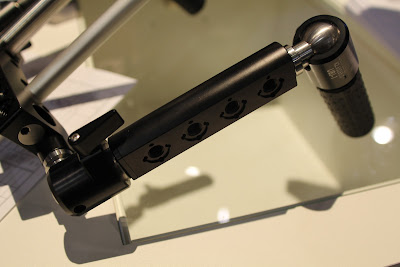 And here’s Arri’s 15mm base plate for the Epic/Scarlet. I was wondering when they’d come out with support for those cameras, considering Wooden Camera seems to have a monopoly on aks for those bodies at the moment~ 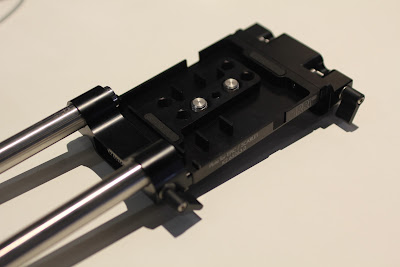 I’ll be more productive tomorrow, I SWEAR.
But I did just get a coupon from Banana Republic…
Tags: 1dc, arri, artemis, canon, nab, sachtler
Permanent Link