By Tim Wu on April 20, 2012 in Uncategorized
0
0
SLIDERS. I remember the first time I heard about these things becoming available on a consumer level. Someone in Europe slapped a camera on an industrial IGUS carriage rail and went, “Oh… a… mygod…
And thus the company Glidetrack was born. Of course, it didn’t take long for people to realize, “wait a minute… that’s just a slab of metal with a rail carriage on it.” I can buy that straight from IGUS and make it myself! And then it didn’t take long for people to try that and realize, “ugh, fuck, this is hard.”
The select few who weren’t too lazy though did go on to start selling their own. Then more people started making sliders. AND NOW EVERYONE MAKES SLIDERS. Even Glidecam is releasing their own slider: 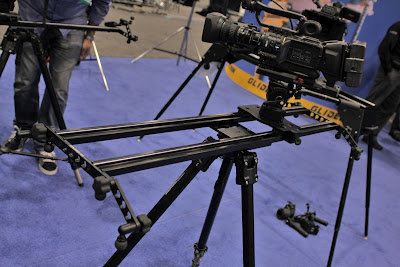 And not gonna lie, it’s pretty damn solid. It has a good amount of drag and doesn’t bend under the weight when you push the carriage to either end like most lighter-weight sliders do. At the end of the day though, it’s a piece of metal with a thing on it that goes left and right. And that’s…about…it.


“WELL FUCK THAT,” says Indie-Dolly Systems, who demoed their new slider prototype at NAB this year. 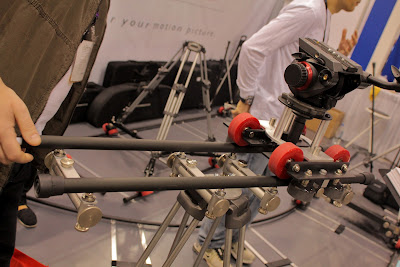 They’re sliders work more like mini-dollies, with 3 foot lengths of track that can be connected to one another. The carriage, while a roller wheel system, has a nice weight to it and good amount of drag. When you have carriages that just roll freely left and right, the operator has to do more to make it smooth. (UGH, I don’t have to hone skills, c’mon) Having drag lets you feather in the start and stop. Imagine pushing an empty shopping cart vs pushing a shopping cart with an Asian man in it.

The Indie-Dolly Systems slider will ship with 9 feet of track and the carriage with the option of 75mm, 100mm, or flat mount for around $800 and a target release date of July. It’s a novel concept that at least gives you a little more flexibility considering its length isn’t fixed. I think Asian Bike Cart Man will be a much more effective dolly though, but it’s still in the prototype phase unfortunately…


And on the topic of Asian things by Asian people, the folks over at Nori in Toronto were showcasing this little doo-dad. 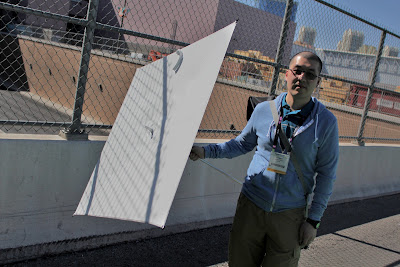 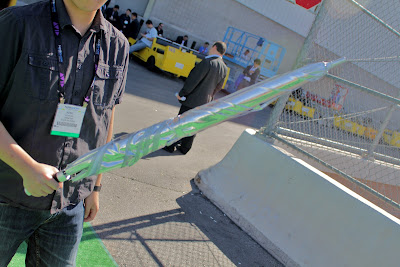 …AND AN UMBRELLA. Calm down Toronto, really. There’s only so much innovation I can handle today after finally watching the highly anticipated video to Pitbull’s “Back in Time,” the official theme song to MIB3.


For $189, you get one silver BOUNCEBRELLA (my official new name forever because Square Bounce is not nearly as cool), one white bouncebrella, and a shoulder sling. So you can re-enact all your favorite katana-drawing scenes from movies where katanas or other similarly lengthy objects are produced from one’s backside.


And none of this “expected release date” shit, YOU CAN BUY ‘EM NOW.