By Tim Wu on April 27, 2012 in Uncategorized
0
0
They say when covering events on blogs, “it’s important to get your information up as early as possible so that it remains relevant to your readers.” Well to that I say, “DAMN, I shouldn’t have taken so many photos then.”
Here’s a quick round up of all the fun new swag from the G&E side of things at NAB this year~
// K5600 – Joker 1600 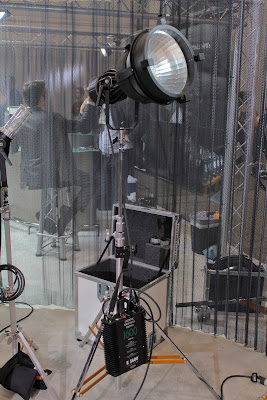 K5600′s newest Joker has twice the output of it’s predecessor, the Joker 800, and can still run off a household outlet, HUZZAH. This means you can throw this baby up into the ceiling of your kitchen to justify eating an entire box of Lucky Charms at 11pm because it’ll look like MORNING. 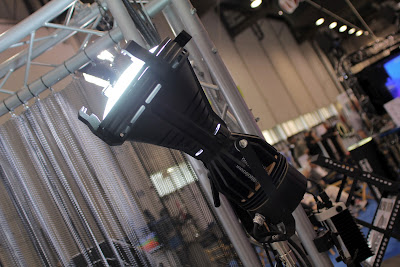 The Joker 1600 comes in the two flavors users of the Joker 400 and 800 are all familiar with, the Bug-lite bare bulb version which adapts to lanterns and softboxes, and the Beamer swappable lens version.


But exclusive to the Joker 1600 is a new version called the Zoom Beamer, which uses no lenses because its housing is focusable like a typical fresnel unit. A Joker without lenses?! BUT NOW WHAT WILL I USE AS MY NOVELTY SIZED MONACLES?? 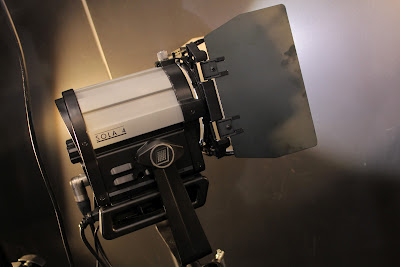 On the tails of Arri, Litepanels just debuted a line of LED fresnel units as well. They come in either tungsten (INCA) or daylight (SOLA) flavors, but there’s no bi-color option. Litepanels says it’s not possible based on their LED technology (BUT ARRI DID IT, SO FAIL, LITEPANELS, FAIL).


I will say though where these units excel over the Arri units is in how the unit focuses. On the Arris, when you spot and flood, instead of the lamp moving within the housing, the fresnel lens in front moves in and out, changing the actual length of the unit. So if you have gels or nets or flags set up close to the unit, spotting or flooding may become an issue in cramped situations, such as porto-potty confessionals.


The Litepanels fresnels on the other hand spot and flood entirely within the unit like traditional fresnels. 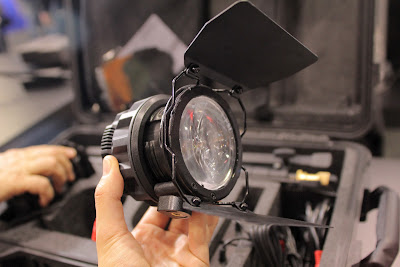 Litepanels also debuted a kit for their popular Sola ENG lights, which are mini on board fresnel LED lights. They’re fully dimmable and focusable with an equivalent output of 250W unit while drawing only 30W. 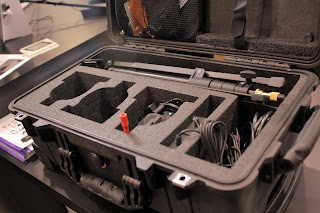 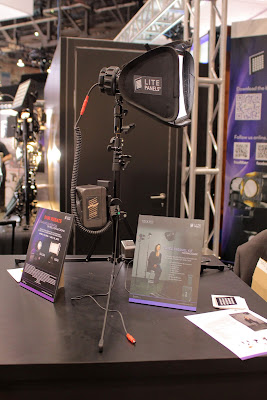 SOOOOOOOOOOOOOOO CUUUUUUUUUUUUUUUUUUTE. Here you can see the p-tap power cable that lets you power them off battery plates. Because of their low draw, you’d have no problem running the camera and light off the same brick if need be. 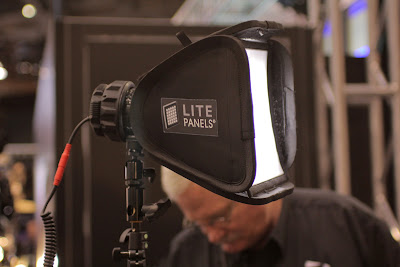 The softbox folds flat and just slots around the head of the unit, just like a regular chimera… ONLY REALLY REALLY TINY

The whole three light kit ‘n kaboodle is $2995~ At that price point, can’t say it’s an incredible buy. Certainly not as versatile as some of the Arri softbank kits at the same/lower price, but it’s a hell of a lot more portable. They’d really be ideal for on location interview and event work, especially when you need more output than those dinky on-board panel LEDs. 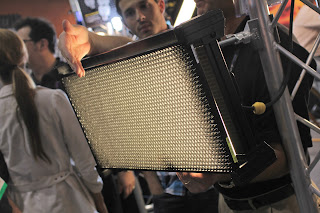 Kino-flo also debuted an LED unit at NAB this year, forever disregarding the fact the word “fluorescent” is in their name. 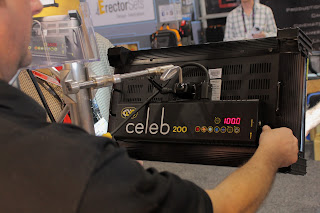 With an output of a Diva 400 and drawing only 1 amp, the celeb 200 is dimmable DOWN TO THE DECIMAL. Finally I can tell my gaffer to give me .3% more output and he can’t sass me. 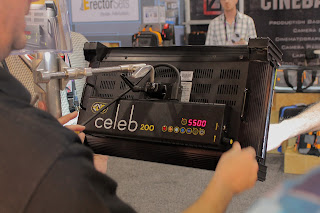 It’s color temperature is also full controllable, and not only from tungsten to daylight, but green to magenta. And when you find a color you like, you can save it to a preset, the same way we all have 90s on 9 preset on our XM radios. 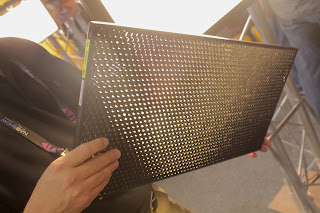 It ships with a gel frame, and two louvers which narrow the beam to different degrees. YOU CAN’T FOOL ME KINO-FLO, I know these things are just a rectangle frames filled with cut up boba tea straws…