So I’ve yet to see Total Recall (definitely not because I was watching Step Up Revolution for the 9th time), but there’s a really neat shot in the trailer that I had been wondering about for a while (@1:05):

There are a couple frame wipes, so my theory was that they have their set choreography, and they’d break that sequence into 4 or 5 camera moves. They’d do one move, cut, shift the camera over, do the next move, cut, shift the camera over, and so on and so on and stitch it together in post with the frame wipes. And all the people that fall in the foreground are composited in later. That’s how I’d do it, anyway, especially for the next Bon Appetit piece where Jean Georges tries to get arrested by heavily armed customs officials for importing French truffles and un-pasteurized Camembert cheese but then KILLS THEM ALL INSTEAD. (That’ll be in the September issue~)

Total Recall was actually in this month’s American Cinematographer too, but I completely forgot it was there because the cover story was the Dark Knight Rises, which was maximum amounts of more interesting. But on a flight to LA for a shoot yesterday, I finally got around to reading through that article (after buying a 9ft tall replica of the Easter Island statues for my study off SkyMall), and they don’t even talk about that shot! BOO.

But alas, the answer is actually in the bts footage over on Trailer Addict!

And the answer was just get two more cameras and have them all going at once on their own remote crane rigs, have their ending frames overlap and just paint out the rigs in post. DUH. So simple, I mean, just look at this video village. EASY. 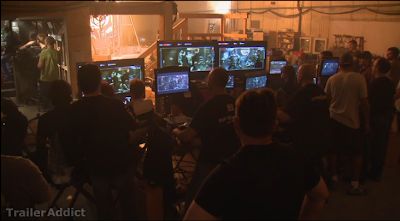 Here’s the rest of b-roll that’s sure to make you sad you don’t poop solid gold:

And then here’s the b-roll to Hope Springs to make you happy again!