So it’s not so much of a curry as is it is a cream stew… in fact, there’s no curry in it all. I don’t really know how it started, but since I was little, I’ve been calling this white curry, so the name kinda stuck. Oh well.

So just a heads up, this is also a two-day recipe, but it’s not required really. As with any stews or thick soups, it’s always better the next day because the flavors meld and whatnot, but if you can’t wait, it’s not a big deal.

SO HERE WE GO: 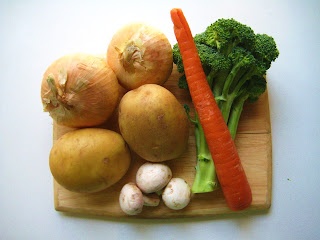 This makes a solid 4 to 6 portions. Our vegetables from left to right: 2 medium onions, 2 medium potatoes, a cup of mushrooms (4 oz, or half a container), two medium carrots (I ended up adding another one later), and one medium head of broccoli. 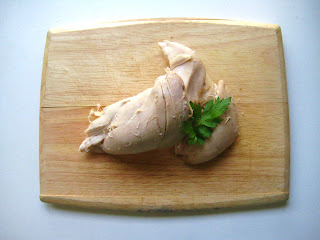 With white curry, I generally like to go with white meats, such as chicken, turkey, or pork. It keeps the dish nice and bright in my opinion. These are two chicken breasts that I pulled off a whole rotisserie chicken that I got at Whole Foods for $9.99.

I’ll do a post later next week about making the most of these store-bought chickens. At under 10 bucks ($5.99 even at supermarkets like Safeway or Albertsons), they’re pretty cost-effective if you’re looking to make meals ahead of time. 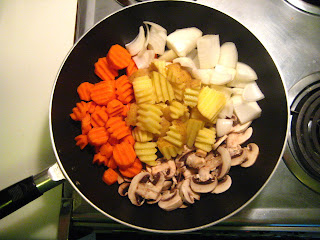 The preparation of this dish is very similar to the nikujaga recipe. In fact, it’s more or less identical except for the later stages. We begin by sweating the vegetables over medium heat with about two tablespoons of butter or oil or even non-stick spray.

Butter is preferable, as it compliments the rich-ness of this dish, and if you use oil, use canola or vegetable oil. The inherent flavor of olive oil, especially extra virgin, is a little overpowering if used here. The same goes for most (if not all) Asian dishes actually. Stick with canola, peanut, or vegetable oil. Save the olive oil for Italian dishes. 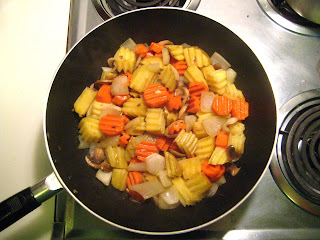 Cook for about 5 to 10 minutes, just until the vegetables start to give off some of their moisture. 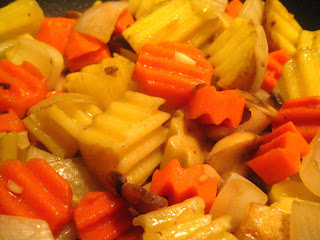 This is called “sweating,” by the way. We’re cooking until the onions start to turn translucent around the edges and mushrooms soften. Don’t forget to season your vegetables here with some salt. No pepper though. You don’t want little black specks floating around your stew~ 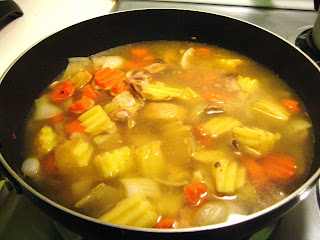 Then, like with the nikujaga recipe, add enough water to cover your vegetables. Add at most 5 cups if you’re only using 1 box of sauce mix. 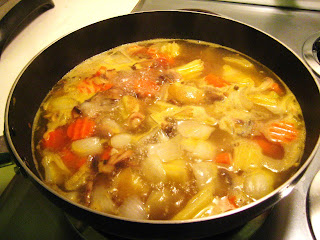 And bring this to a boil. At this point, I also like to add around a tablespoon of dashi. 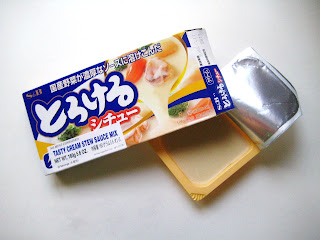 Then we add our “tasty cream stew sauce mix.” The same goes with these mixes as with the curry mixes. If you made a cream sauce yourself (or bechamel sauce, if you want to be pretentious), it wouldn’t taste the same. It would taste kinda like a chicken pot pie filling. 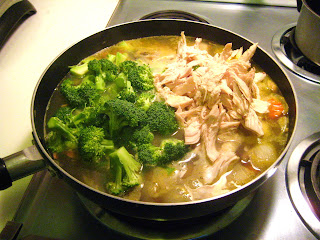 Because our chicken is already cooked, and the broccoli doesn’t take long to soften, we add these in last, after we’ve added our stew mix. As you can see, I just shredded the chicken breasts by pulling it apart by hand into bite-sized pieces. 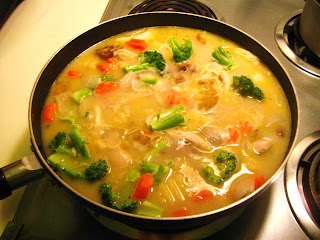 Give it a good mix, and cover and simmer over low heat for a good half hour to 45 minutes at least. The longer the better, depending on how you like your vegetables cooked.

Again* 1 box of sauce mix is good for about 5 cups of added water. I’d pick up a couple boxes so that you if you add too much water, you can thicken it back up, or if you like thicker sauce, then you can add single cubes until it’s thick to your liking. 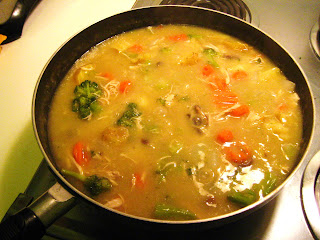 As you can see, a lot of the vegetables shrink down, and the chicken starts to break apart too. I used pre-cooked breast meat here, which does break apart like this in stews.

If you want chunks of chicken, go with raw chicken breasts or thighs.

Cut it up into cubes, saute it quickly over medium high heat to brown the edges, and remove from the pan. Then proceed with the vegetables and etc. Then add it back into the stew with the broccoli. Of course, thigh meat works just as well and tends to stay more tender over long cooking times. 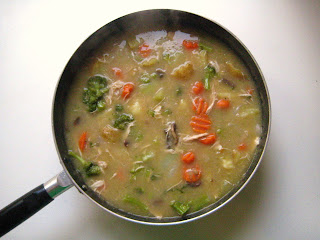 From here, you can let this cool, and let it sit in the refrigerator overnight. This will give the stew a chance to settle and let the flavors meld. Again, this isn’t mandatory, so if you’d like, you can skip the cooling, and move straight onto the gratin part. 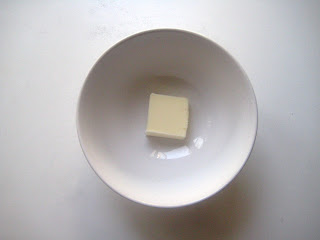 In a small bowl, melt 1 tablespoon of butter in the microwave for about 2 minutes. 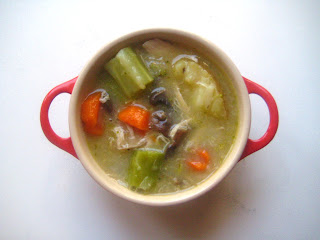 While that’s melting, spoon some of the curry into an oven-safe dish, such as my French onion soup bowl! Also, turn on your broiler to its highest setting. I just use my toaster oven set to broil. 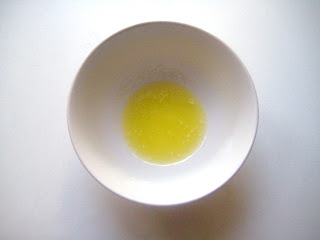 Once it’s melted, add a little bit of salt. 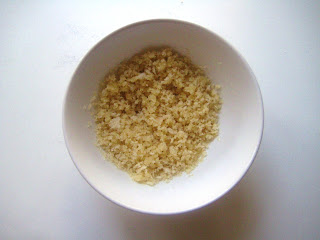 And toss in a handful (about half a cup) of panko. 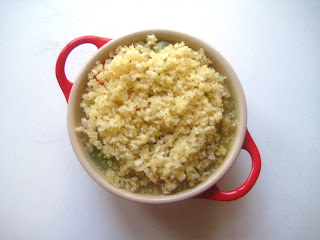 Give it a good stir and top your stew. Be liberal with this; the layer should be about a quarter inch thick. Pop it in the broiler, and stay watching it. It only takes less than a minute for the panko to take on a nice golden brown. 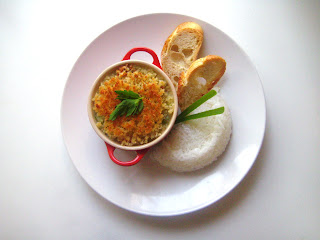 Serve alongside white rice and a couple slices of French baguette. 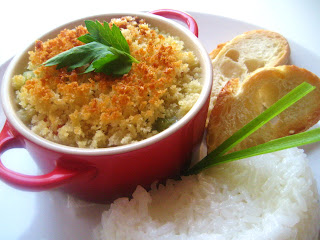 And top with parsley and garnish with green onion that you won’t eat to be doubly egregious. 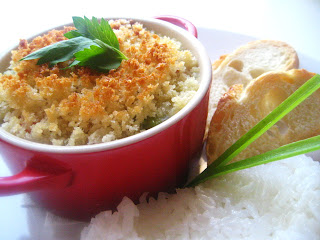 Extra points if you eat this in an over-exposed environment. 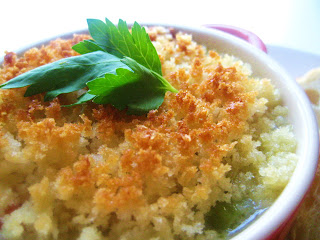 The gratin topping isn’t really necessary, but it does add a nice texture to the dish. 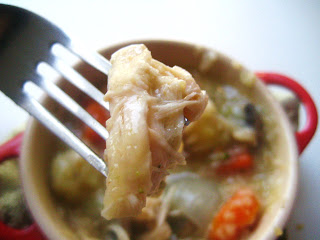 The chicken for the most does retain it’s shape. 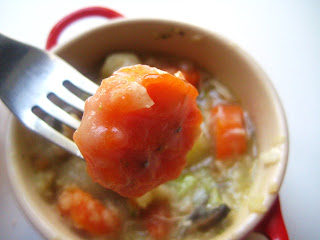 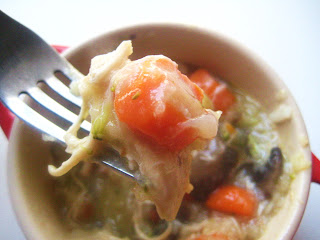 What’s great about stews like this (such as the Japanese hamburgers from the last post), is that the leftovers taste even better. So I strongly suggest making this in a large batch, and saving it for throughout the week. Split the pot up into individual tupperware containers and you can keep ‘em for up to about a week and a half in the refrigerator, or freeze them and they’ll keep for around 1 months to a month and a half.

Enjoy~ I made this at the start of the week when I made the hamburgers, so I now have a solid week and a half of food prepared, so my next couple posts won’t be whole dishes, but rather some small tips and things like that.

I’LL MENTION YOU IN THE POST AND YOU CAN BE FAMOUS. holy crap.