With about a week left here in Washington, I finally made it out the national zoo to see those pandas. Me and a couple of other people followed this thing they called the “Asia Trail.” They called it that because it was lined with some bamboo, and, as we all know, that’s all it takes to make something Asian. They even line some of the habitats with fake plastic bamboo with spiky tops. Now that’s dedication.

Today was pretty fucking hot, so a majority of this trail consisted of wading through crowds of little children with unnecessarily expensive cameras, and looking for these animals which were tucked away in the farthest corners of their fake forests, but to little or no avail. In fact, even after walking past 5 “Fujifilm Photo Spots” for the giant pandas, the first panda we found was this one. 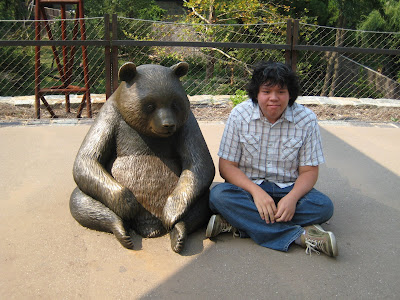 Unfortunately, it had wandered beyond the fake bamboo perimeter, and was immediately cast in bronze by lasers. So I took a picture with it. But a little whiles after this we finally find them indoors in their feeding place tank pseudo-mountain top thing. 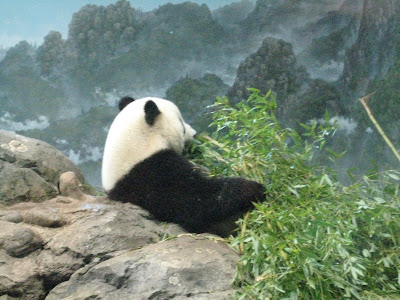 This is one of those rare instances where the backdrop actually looks somewhat kind of maybe real… kind of.

And here’s that image 35 times a second with slight variations inbetween.

So tonight I caught an episode of this comedy series on HBO called “Flight of the Conchords,” and it was one of the funniest things I’ve ever seen. EVER. It’s awkward comedy, akin to the Lonely Island and Stella, but in a New Zealand accent, which makes it even better.

Here’s a video that will make absolutely no sense to you outside of the context of the episode, but hopefully it’s intriguing enough to make you order HBO and watch it on Sundays.

Why yes, the trailer tells you absolutely nothing about the movie, other than the fact the Scarecrow is in it. But still, go see it. It reminded me a lot of Event Horizon, if you remember that movie, only a LOT less creepy and void of a screaming Lawrence Fischburne (which, in the case, is a good thing). And it’s as visually beautiful as The Fountain, only with a plot that a normal human being would actually be able to follow the first time through. Point is, I embedded the trailer in my blog, thus alleviating you from one extra step to click a link and then press play. Thus, through the transitive property, you must go see this movie.